Oh, What a night. 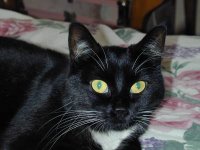 A story I had to tell!!
Its 2, freaking, am. andI hear a cat scream downstairs..Crystal. My cat (mystic) JETs outa her Hammock( in our bedroom window), screaming her lungs out. She doesn't hit the floor till she's threw the door!! Shes running downstairs because we have a "cat burglar" again! We occasionally get one of two male cats that come threw my girls cat flap to steal thier food. I'm hot on their tails....There he is by the cat flap, looking scared and pitiful. Beautiful Orange sherbet/white fluffy boy. Crystal, is leaning her body against the flap from the outside. I've seen her do this to Mystic..its a joke between them. Mystic(Mitzie) has him from the floor. Ever see a cat do a cartoon run around the room..on the walls? Well he did!! Broke at least one piece of good pottery .. an art piece.. that I was very proud of.
I tried to open the back door to give him an out but it scares him worse so, he runs Upstairs!! I go to open the front door to give him and out and blam......I hear the cat flap. Didn't see a thing. So, I'm not actually sure he's gone. Mitzie is walking around phleming ..searching but seems calm now. I think that was him out the flap...Probably with Crystal chasing him all the way to Canada.
If it wasn't for the pot, I'd be laughing. As it is....I'm not crying about it. This is the pot the City of Mountlake Terrace considered buying 10 years ago. They bought a statue instead. Oh well.....sigh!
Crystal just came in...her search pattern led her up the stairs and down, then out the flap. I'm pretty sure he's not in here. Just in case I'm staying up for a couple hours. Besides my adrenalin is up! I'm not gonna cry!!
Posted by Anne Turner at 11:05 AM