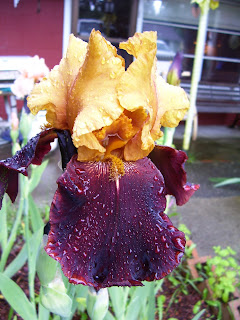 Things have been slow since The BlackSheep Gathering.
My Saturday Knitting time was put on hold .
First Saturday after, Wyatt and Jyll came down for a few hours.
Next Saturday was Eryka(12) and Bryces' (2) Birthdays. They had a really nice Birthday party for them at Lou Anns (Jylls mother) lil ADOREABLE house. Its one of those Sweet old Doll house size houses. One person could be very comfortable there but two would be kinda tight. She's done a beautiful job decorating it.

I've been fighting, what I thought, was tendonitis from knitting or spinning at blacksheep. Which seemed odd because I didn't do THAT much of either. Now I'm thinking it was from weeding. Which I can happily put on hold till say.....ever. I really should just hire someone. Once I get down to weed I can't get back up. I could be stuck there all day! Not really but it gets worse the older I get. Heres a Pic of my fav Iris that I call "Caramelo"

I decided to start knitting again pain or no on Monday and it hasn't made the tendonitis any worse. My frustration level is at about 80 % tho. I'm working on the Alyce tee pictured a few entries below. For some reason I can't follow directions.. a 60s hippy not able to follow directions..who knew..lol

Otherwise, the month is slow..hot.. but progressing.

Brother Mike is still having tests. We have done alot of research online and are hoping they can take care of his cyst without surgery, this time. They have already drained it. I know.. ewww.. but people keep asking how he's doing.

Oh and its here again..... Boeing is voting on if its ok to think about striking this year. Has it been 3 years already! The vote to sanction is today. One year we were out on strike till 3 days before Christmas. Not many presents that year. Most were homemade which is better if you ask me..anyway. 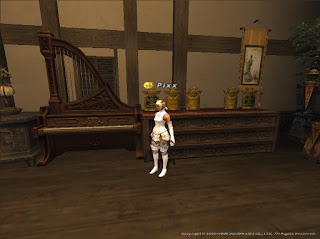 Marshall got me the nicest present. Non gamers won't appreciate this but he got me a disk of Final fantasy XI music, played on Piano. It also gives you a harpsicord for your Room (moghouse) in the game. It plays a tinkling tune every hour and looks so sweet. Not a great picture but.. this is my character Pixx's room. Showing the new Harpsicord. All the trophies behind her are for a small portion of the chocobos she's raised (Ostrich like creatures you ride and race). Its kinda cramped where its sitting. Never noticed I put it in front of the damn window.. I'll have to move it. Hee hee. Thanks Marshall.. really nice!! I love it!
Posted by Anne Turner at 3:46 AM