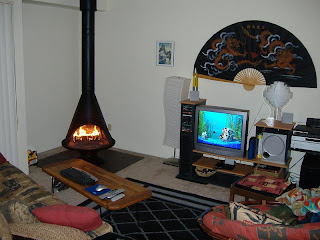 The last place had some health issues. Rusty tap water. We fixed that with a filter and bottled water. Not that big of an issue. But,when he first moved in we noticed a dark spot on the ceiling..like it had leaked once upon a time. The day we looked at it, it had RAINED non stop for weeks and the spot wasn't even damp. So, we figured it had been properly fixed. But, during the windstorms we had in December 2006 it started leaking ,again! Two months later after a ton of complaints they still had not fixed it. Woah, they gave him a bucket..how nice. (sic) I'm so glad he got outa there.

So, He's moved, again! Hopefully, this will be the last time for awhile. The complex seems more a community then any of the places any of us have lived. The staff all live in the complex. We even noticed that people don't seem to move out much just move apts. Better floor plans more rooms or better views. They have 2 pools and nicely kept grounds.

The Picture of (Punk butt) Angel is for Cynthia and Charles, who gave Marshall the cat last year when she was a kitten, so they can see how she has gown.

She didn't quite know what to think of a fireplace.
The picture of her close to the fire is a camera angle thing. She's really not so close as to singe her whiskers. Picture was taken before it got really hot. He did say, she decided that laying out in front was a much better idea. 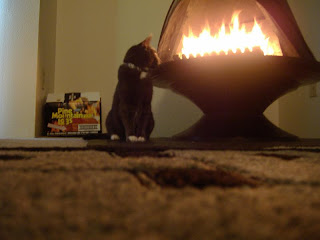 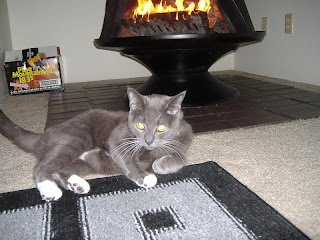 Glad he got settled into his new place. Looks like kitty is happy with the new digs.