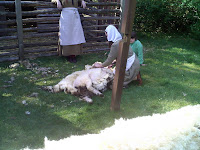 Marshall went to the May day celebration at Camlann town. Its a medieval village roughly around Carnation that we used to go to several times a year when he was growning up. For the last couple of years they've done a sheep shearing demonstration. With the old fashion shears. Then they auctioned it off. Guess who won. No idea what kind of sheep this is. Just that its fairly young and it mmmm, pooped alot :)
UPDATE: I'm really sorry to say this but: this fleece turned out to be.. politely.. junk. When I took it to the processor they nearly burst into tears. Telling me that the fleece was felted..while on THE SHEEP! Something was said about the sheep being penned together and rubbing against each other while trying to stay warm (Awww.. poor babies). Which felted the wool. Sigh. It was a really sweet gift idea. I really did and still DO appreciate the thought!! 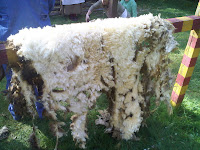