Still watching for that couch. Due next week, they say it will be on the truck the 15th! Fingers Crossed. I'm a slightly happier girl.. or maybe a more resigned girl..sigh. Geez, I hope I don't hate it when it gets here!!

One ball of yarn into the feather and fan scarf. The Lorna's Lace yarn I'm using has a hand dyed look. Darker and lighter but very 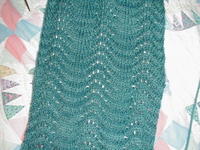 The entrelac sweater is a goner. Decided the yarn was just to harsh to wear next to the skin. I'll make pillows or a rug out of it. Something I can whip up on my Bond Knitting frame. I made alot of it...5 medium skeins. Haven't weighed it so I can't tell you exactly.

Started another poncho/capelet. The first hot pink and Noro multi 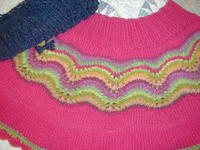 I made had young girls coming up to me asking if they could buy it somewhere.. but in blue or whatever. This one is Dark blue that I spun a long time ago. You start at the neck and work down adding stitches every 3in or so. I'll write it up..really I will!! I'm writing the blue up as I go. The Pink only comes down to the elbows and is just enough to be warm but not enough to look like a tent. I haven't decided what yarn I will use with the blue yet but I do have a Noro Iro waiting..and also a Manos del Uruguay multi colored. Both have a dark blue base with torquoise and pinks. I'll save my final choice till I have another couple inches of the blue done. 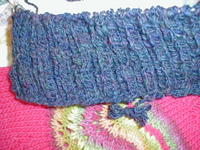 The strike is still going on.. in case you don't watch the news or aren't from the Seattle area. My husband and I are having fun. He spent a week researching Smoked salmon brine recipes then went and bought a prepackaged one. Saturday they soaked all night. Sunday, he put 3 salmon fillets in his makeshift smoker and basted them with honey and spices off and on all day. Watched it like his favorite dog whos having puppies. He did an awesome job!!
OMG.. its so yummy!! Its all I can do to not go and get little pieces. Smart man put 2 in the freezer and made small packets (ziploc snack size) of the 3rd, so we both don't OD.
So, now he's researching smokers.. all day.. all night!! I think he's going to build one out of an old washing machine tub he saved that is stainless steel. The man likes to make stuff...lol.. thats what really brought us together. We both like to make stuff..lol.
Posted by Anne Turner at 3:07 AM

Just wanted to announce the 4th anniversary of Hand Knits for Young Moderns - a website filled with scans from vintage knitting pattern books - thank you!