A thought about Birthdays

Well its here at last. I'm Officially 60. I've been telling people all year that I was nearly 60 so I could get used to the idea. Thought it was going to be more tramatic. Had a little Anxiety attack on Sunday but realized what that was right away. Got some hugs from Jerico and Bill and calmed down.
Woke up this morning at my usual 4am even tho Bill is taking the day off to be with me. Nearly ran into a Giant balloon with a floor weight that starting singing "Happy Birthday, From ELMO" Which I grabbed and Jammed in the kitchen so it wouldn't wake up Jerico..lol.. Laughing all the way. There was a teeny box by the weight with a new black hills gold heart in it..YEAH!! My other one broke and I was so upset. And a Card telling me that He loves me.. which he never says in words..but evidently..from the card..tells me in burps and other rude noises..lol!! ~Shakes her head~ 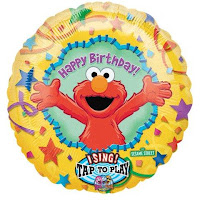 I want to thank all of you who remembered my birthday. Well remember isn't probably the word. Being, I said things like "oh thats close to my birthday" and "Did you know its my birthday next week" I'm as subtle as a sledgehammer. Thanks for you gifts. I treasure everyone of them!! Jerico and Mike(my brother) GOOD CHOICE those gift cards from Village Yarn and Tea..such smart guys.
Posted by Anne Turner at 4:26 AM

Happy Birthday, A! I wish you many happy hours of time spent with the people you love doing the things you like best! I'm guessing that means online games and crafting with cool people!

Happy Birthday to you! You are a joy to be around, I feel so lucky to have met you! :)

Happy Birthday!! We love you!!!

Eryka, Trysten, Jayda, Bryce, Me and your son lol