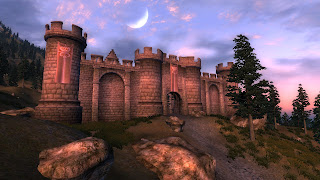 Quick update. New Computer, means New games, means not much blogging.
First thing, I bought for the new computer was the game Oblivion and all its expansions. At the moment I'm am rushing around killing everything and just realized.. I've turned into a Vampire..geeez! Don't you just hate when that happens!!!!
Lots of things have happened since I blogged last.
I finished one the cowls/smoke rings I was working on. After I'd totally finished it I realized it was to big..OH NOW, I check the needles. Pffft! They were 8's and were supposed to be 6's.. *Smacks self in head* No biggie.. so I control felted it. Just enough that its just the right size. Only problem with it now is that its fuzzy and tthe fuzz gets up my nose and eyes. So, now I'm making another of non fuzzy yarn in a lovely Purple and Green handpainted yarn. Oh ya.. on size 6's...*blush*.
Also, New is Jerico is home for a month. So, my yarn room is pretty unaccessible but I'm very glad to have him here. AND... Marshall lost his job. Why, you ask? Beats the shit outa me?? From what we can tell he made to much money and they had to cut back. No worries tho. He already has had a walkthough of a company he's wanted to work for .. for years.. and not building server racks but possibly just working with them. Believe me .. theres a huge difference. Some kids grow up wanting to be policemen or Firemen. Not my kid. He wanted, more than anything, to be a Network administrators assistant. Not, the guy that over sees but the guy who fixes and troubleshoots. Gives ME a headache.
So, I'm knitting and trying to figure out how to become un-Vampired... I hate being a vampire ..all those skin melting sun problems. Hee hee
Posted by Anne Turner at 3:47 AM

With the change in the weather you need to get un-vampired quickly. I have been seeing a bright orb in the sky. Glad to see you posting. :)